And all of a sudden… another Fakemon region update! Because… why not? It’s been a wild busy couple months for me as I’ve been deep into several big comic projects. I finally shipped off the final files for Lost Time, my graphic novel, and although I have other projects to get to, I took a bit of time to flesh this little side-project out some more in my down time, just to keep me a bit sane. Maybe. At this point, with how much I’ve put into this thing, I’m definitely starting to think of making a little PDF/zine collecting all the Fakemon and lore for the Lapeo region, once I have enough of it. Since hey! That might be fun. I’ll of course still keep it all on my blog here for free, too.

In case you don’t know, here’s where to begin when it comes to my little Fakemon project, and another update I made as well. The general idea is this is a Fakemon region where only fossils are available, and because the technology for restoring fossils in this region is more finely tuned, many previous fossil Pokemon will take different forms, and not all be part-Rock type. Of course, there’s original Fakemon too! There’s a bit more of that in this batch. Let’s take a look! 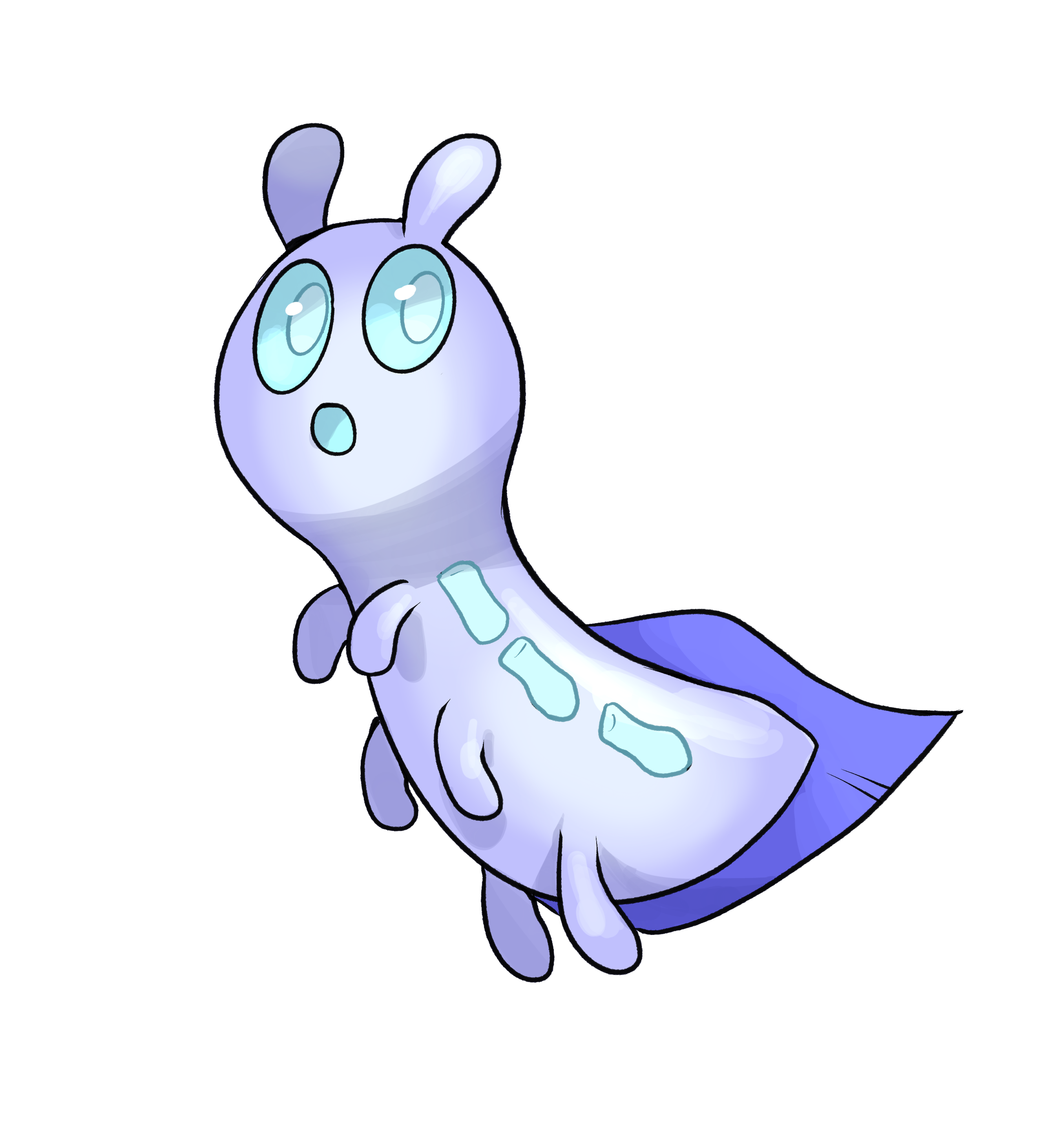 First we have Vertebraia. It’s a Water/Ghost Pokemon, and is the Lapeo region’s “mythical” Pokemon (so basically the equivalent of Mew, Celebi, Victini, etc). Just a little guy! It’s dex entry is:

(Chordate Pokemon) Vertebraia is an ancient, basal Pokemon. In deep waters its exterior becomes invisible, with only its backbone glowing in the darkness.

Vertebraia is based on Pikaia, a basal chordate and once thought to be the ancestor to all vertebrates. Although that’s not quite the case, I thought such a interesting creature would make for a fun (and cute) mythical Pokemon. Seems like so far both of the legendary Pokemon in Lapeo are Ghost type, but I feel that’s kinda fitting for a region with only extinct Pokemon.

Now for some evolution lines:

Pseudo-legendaries are the powerful late-game Pokemon who usually have pretty dang good stats, such as Garchomp and Tyranitar. I feel like this line could be a good candidate to fit that role. The whole line is Electric/Steel, and are clearly based on sauropods, with some sprinkling of construction equipment inspiration in there, because I think everyone has related a backhoe to a sauropod at some point in their lives. Podlet is also based a little bit on a traffic cone! Here are their dex entries:

They’re each based on a different sort of flavour of sauropod, with Dredbolt being more based around the titanosaurs of the Cretaceous. Its name comes from the titanosaur Dreadnaughtus. I also like to think, if these were ever the modern 3D models of Pokemon, that Dredbolt’s spiked rings on its neck would be constantly rotating. 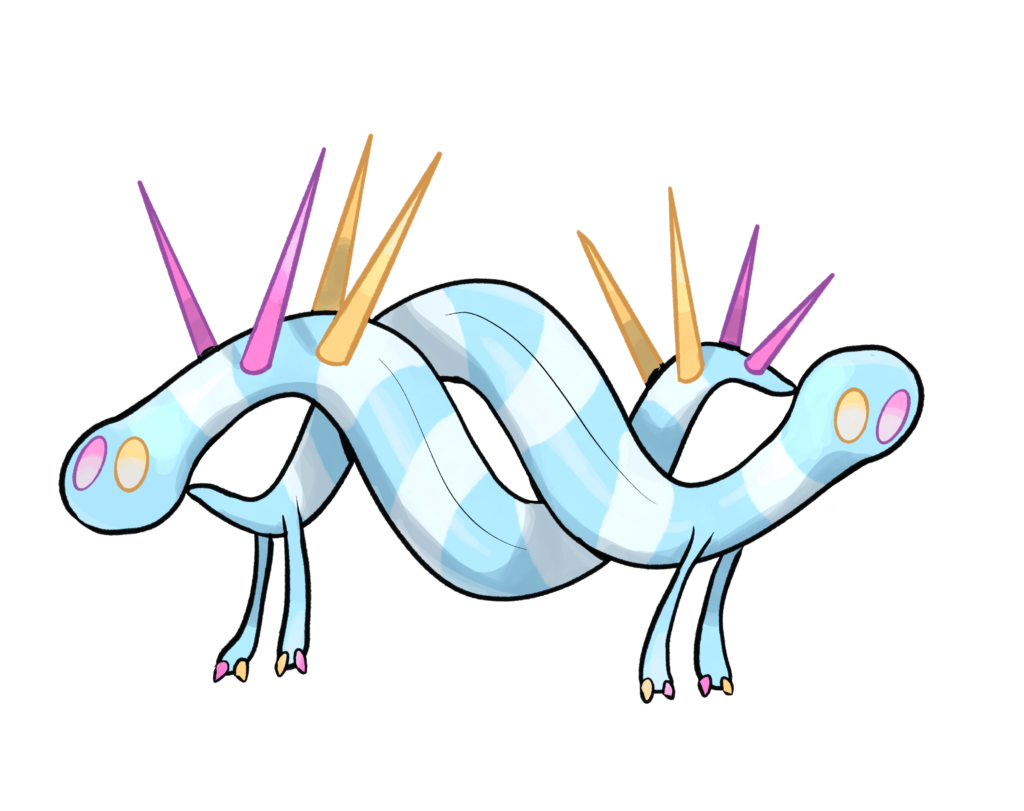 Next we have another little guy! This is Helixugenia, a Psychic/Fairy type! It’s based on the wonderfully enigmatic Hallucigenia. Its dex entry reads:

(Twist Pokemon) The ever tangled bodies of Helixugenia have confounded experts ever since its discovery. It’s hard to tell which end is truly its head.

Since Hallucigenia has such a colourful history of folks puzzling over which side of it was upright, and even which end was its head, I wanted the Fakemon based on it to play with that. Now it’s almost like two together, making it even more confusing! It also resembles a little bit of a DNA strand. I imagine this guy probably knows a roster of moves that make it very annoying for the opponent–plenty of confusion-afflicting things.

Alright, time to get a little more spooky again. Here we have Forgossil and Phantaxon. These two are entirely based around the concept of ghost lineages. This is essentially a lineage of a species that is missing from the fossil record, either because they haven’t been discovered or, most likely in the case of these Pokemon here, were just not fossilized. Their dex entries are:

Both of these Pokemon are pure Ghost types. Just the name of ghost lineage was enough to make me want to do something with it, but I especially just love the tragic idea of the ghosts of Pokemon who’s bones were never fossilized, haunting the Lapeo region. I also like to think Phantaxon has to evolve through either a stone or some “fun” convoluted way. 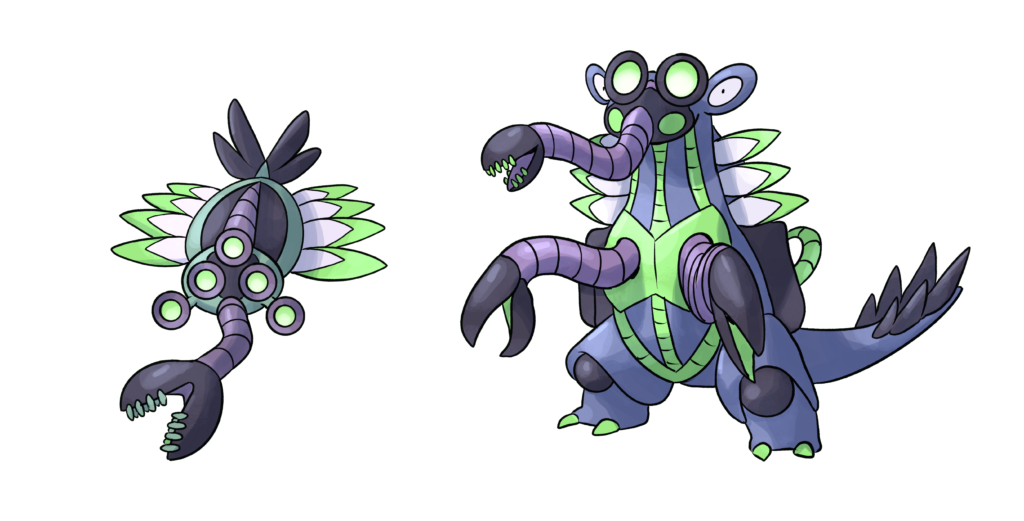 More spookies! And some Lapeoan forms of existing Pokemon! This is the regional Lapeoan form of Anorith and Armaldo! The original forms of these Pokemon are some of my favourite Pokemon designs ever, and based around one of my favourite prehistoric creatures, Anomalocaris. Therefore, it was hard for me to change them! But I think I found a fun new spin for them. Instead of Anomalocaris, I based the two off of Opabinia, an equally weird little guy from the Cambrian. With a snout like that, I also couldn’t help but base it off of old gas masks, making these two Poison/Bug types. Here’s their entries:

The original designs I’ll still forever hold dear, and I want to say that these regional forms aren’t meant to improve on the originals at all–even in terms of accuracy–but more to try a different spin on them. Sometimes they’ll have a updated design, and sometimes I’ll base them off of a similar, but different, animal. It’s all good fun!

That’s what I have for now–a bit of a shorter list this time, but a little seasonally appropriate? I also keep forgetting to ask this at the end of these entries, but I definitely wanna open the floor to you guys: what prehistoric creatures would you like to see turned into Fakemon? I would love to hear some suggestions, because although I have plenty of ideas, if I have to fill a full dex of these guys it’s gonna need lots of ’em.

Hope you enjoy what I have for now!