Minor content warning: This post talks a little about grief, especially in regards to the recent pandemic.

About two years ago I made a small comic/set of illustrations I eventually titled Extinction. Originally I posted it online, and eventually printed it into a small risograph zine. I didn’t really say much about it, my caption for it was generally: “A comic about dinosaurs, but not really about dinosaurs”. Since it’s been about two years I feel like talking about this little 8-page zine, and what it means to me. 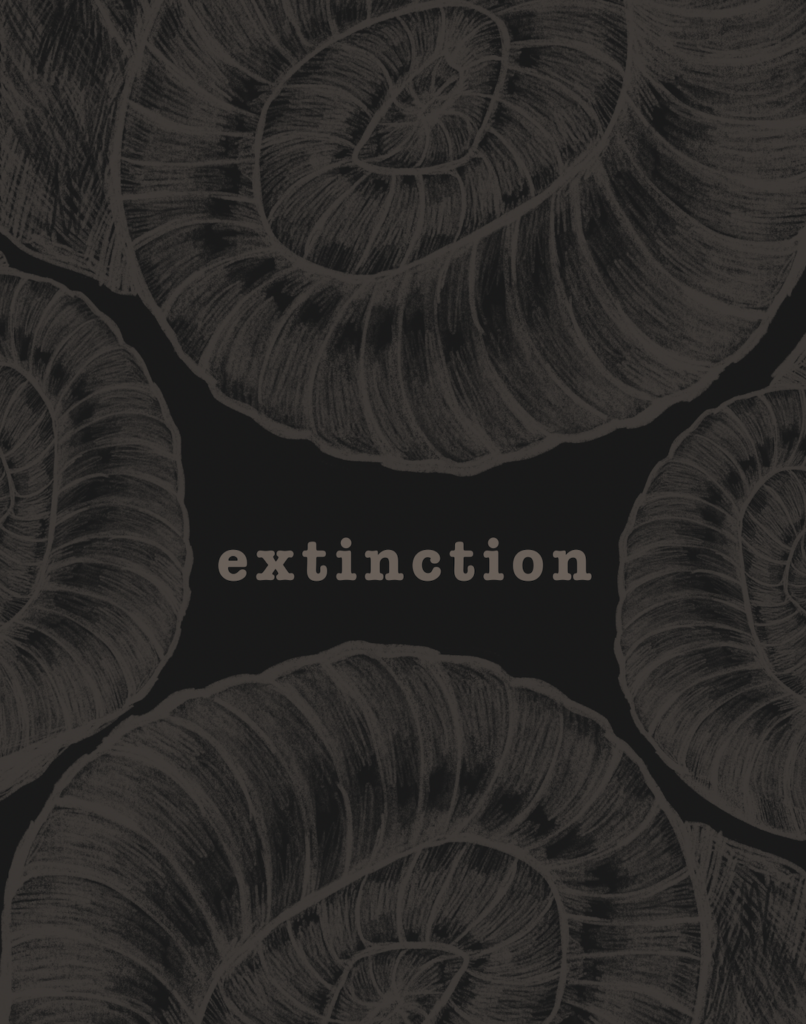 I remember writing the words for this zine on my iPad, then next thing I knew I was scribbling out the artwork, after gathering a bunch of references of old Victorian interpretations of dinosaurs. It was 2020. 2020 was, like for many, a rough year, and parts of it still haunt me today. The pandemic hit full force shortly around my birthday, in March, and afterwards was like a cascade of bad things. They were the absolute worst case scenarios that I had tried to tell myself could never happen. Then they all happened at once, and I was trapped in quarantine and powerless to stop it. March-June in 2020 were easily some of the worst months I’ve ever experienced in my recent lifetime. 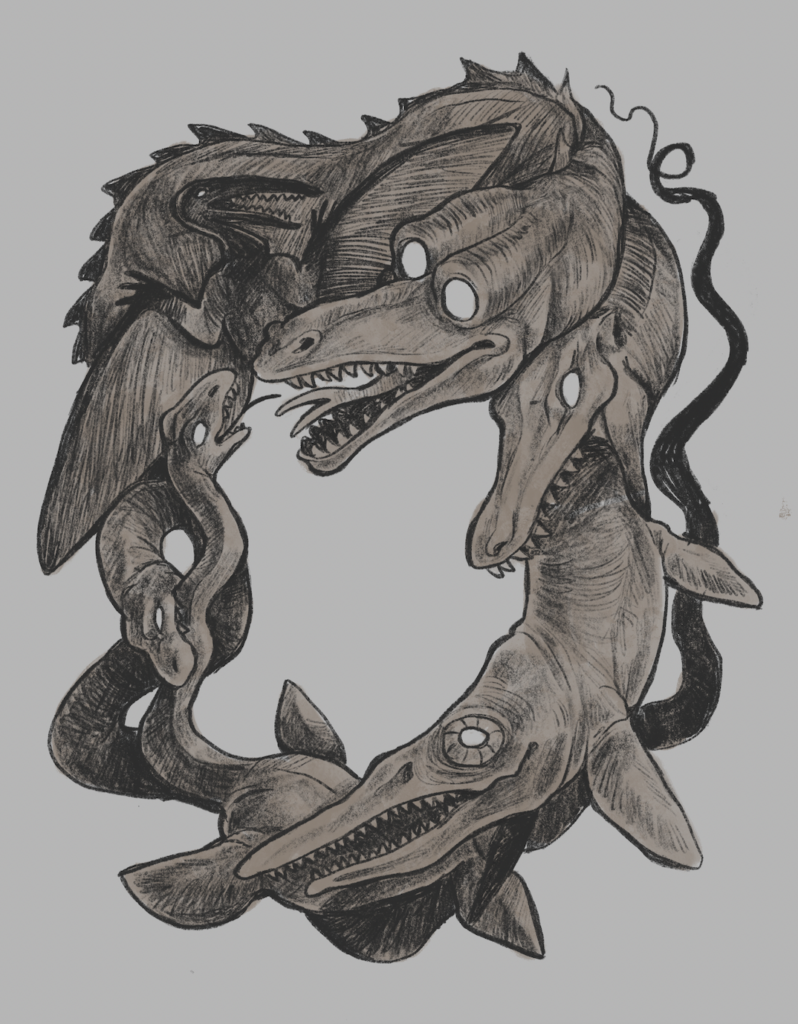 So, when I had the heart to work on this comic, it was a vent. It was about grief. On the surface, it’s a comic about lamenting over the fact dinosaurs are no longer with us, and we will never be able to observe them, but it’s a little more than that. My disclaimer here is that this little zine is meant to be interpreted as any way you see for yourself–so, as I continue to talk about my intention, please do not take it as a guideline to see it only that way. This was what was in my heart when I was making it, but now it’s in your hands to see what you see.

I remembered reading somewhere this old theory, before extinction was something that was considered to happen at all, that animals didn’t go extinct; they just disappeared for a while, and would eventually pop back into existence again. (For the life of me I cannot find where I read this, though. I searched for it tirelessly when I was making the zine but couldn’t find exactly what I remember–maybe I was wrong? If anyone has any idea, I’d love to hear it). It sounds absurd, from our modern perspective, but I remember thinking for a moment what comfort that idea had. Don’t worry, the thing that’s gone will eventually come back, if you wait for it. 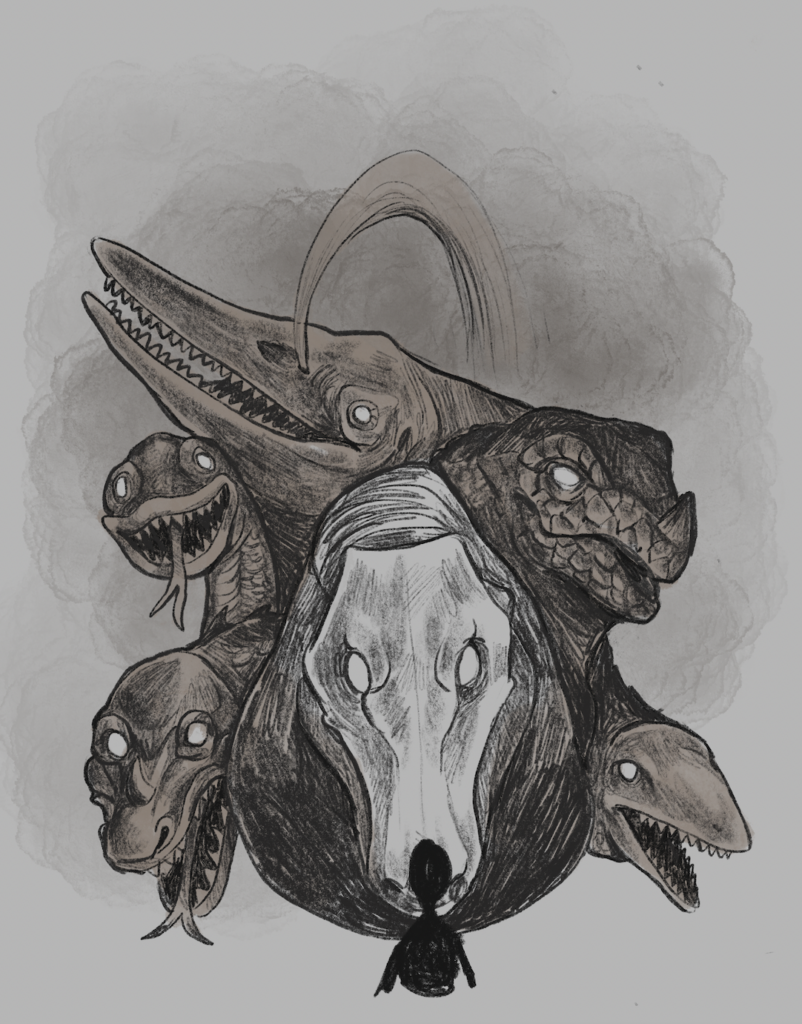 Some things in life are like that, some aren’t. Non-avian dinosaurs won’t be spontaneously coming back to life. Sometimes a large piece of the world goes missing, and all it can do is march on, even if we all look back and are desperate to just know what it was like, when that piece wasn’t missing. 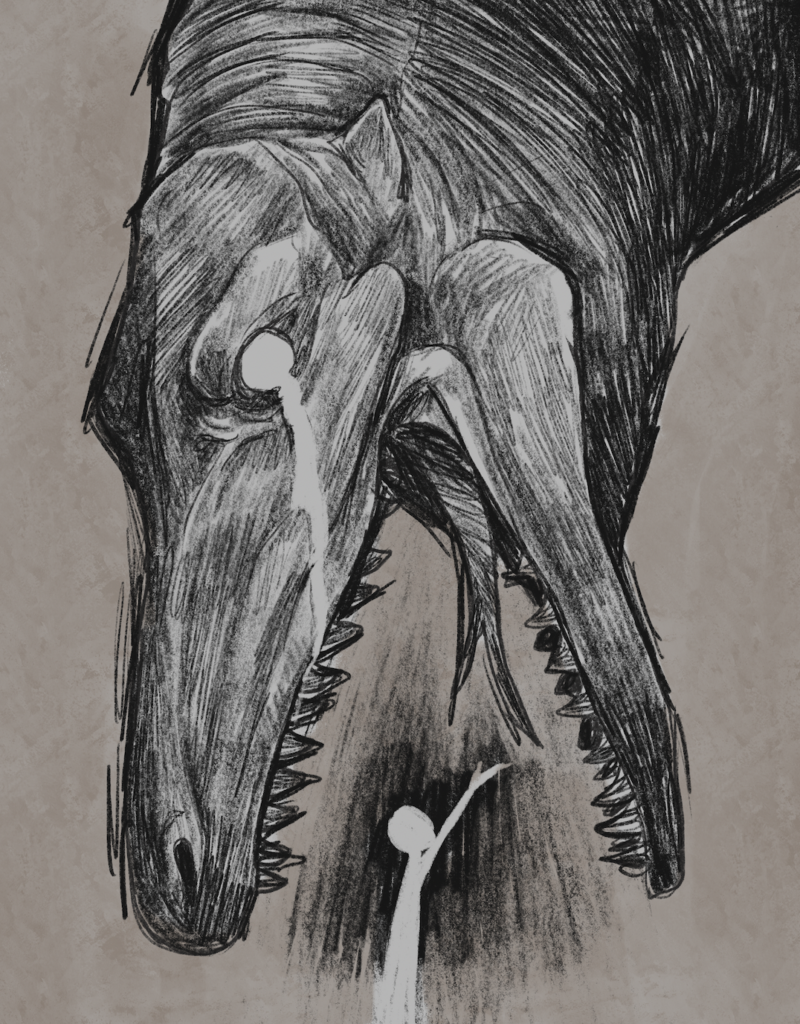 2020 was a heartbreaking year. Almost everyone I knew was broken by it in some way. I’m still broken by it. We’re picking up the pieces and looking forward to a future unknown, changed, and with so many pieces missing. Sometimes you’re just left with the feeling of wanting to know why, and asking a world that’s gone forever if it’ll ever maybe come back. 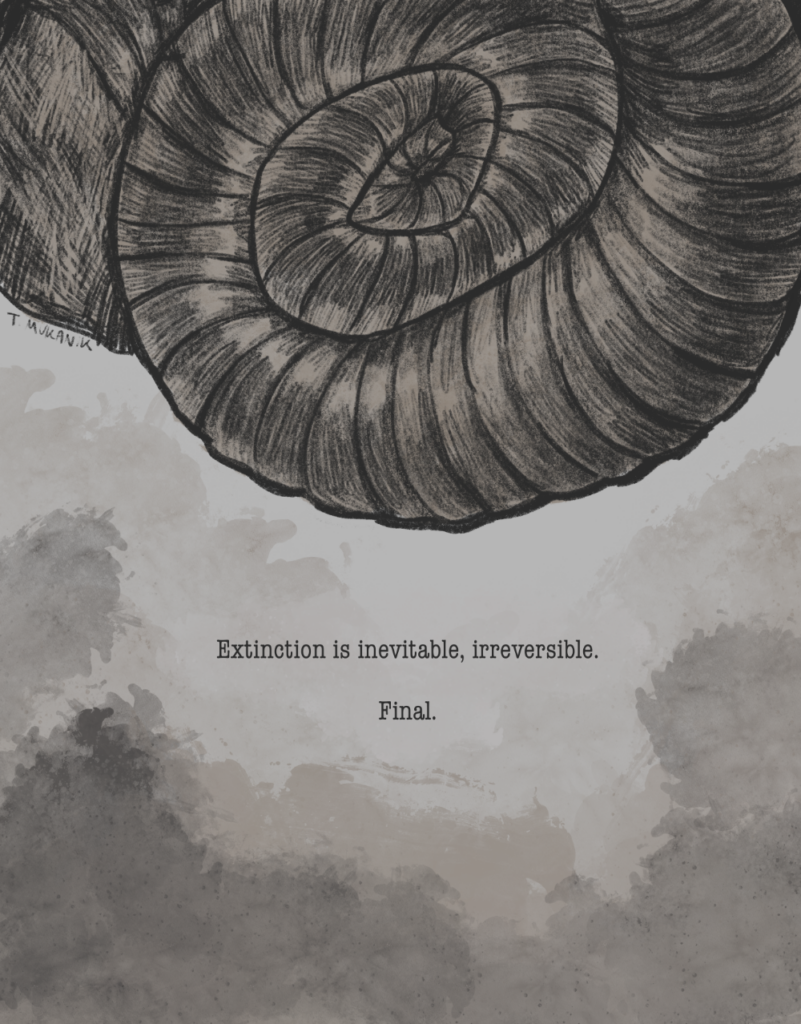 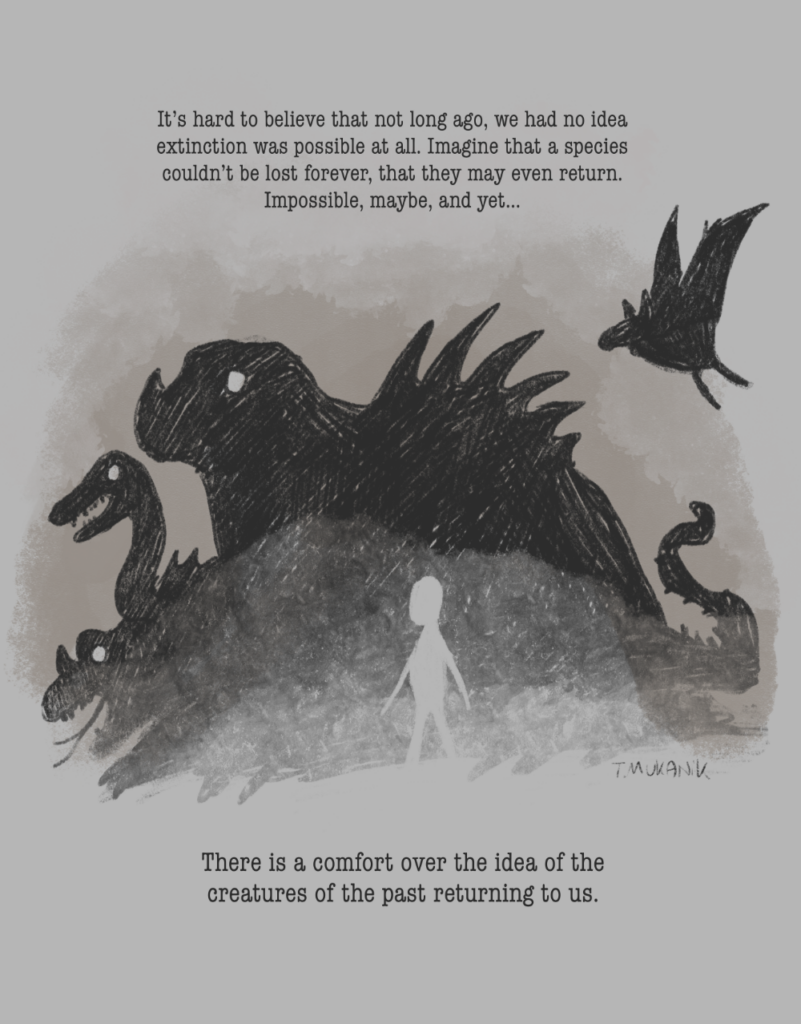 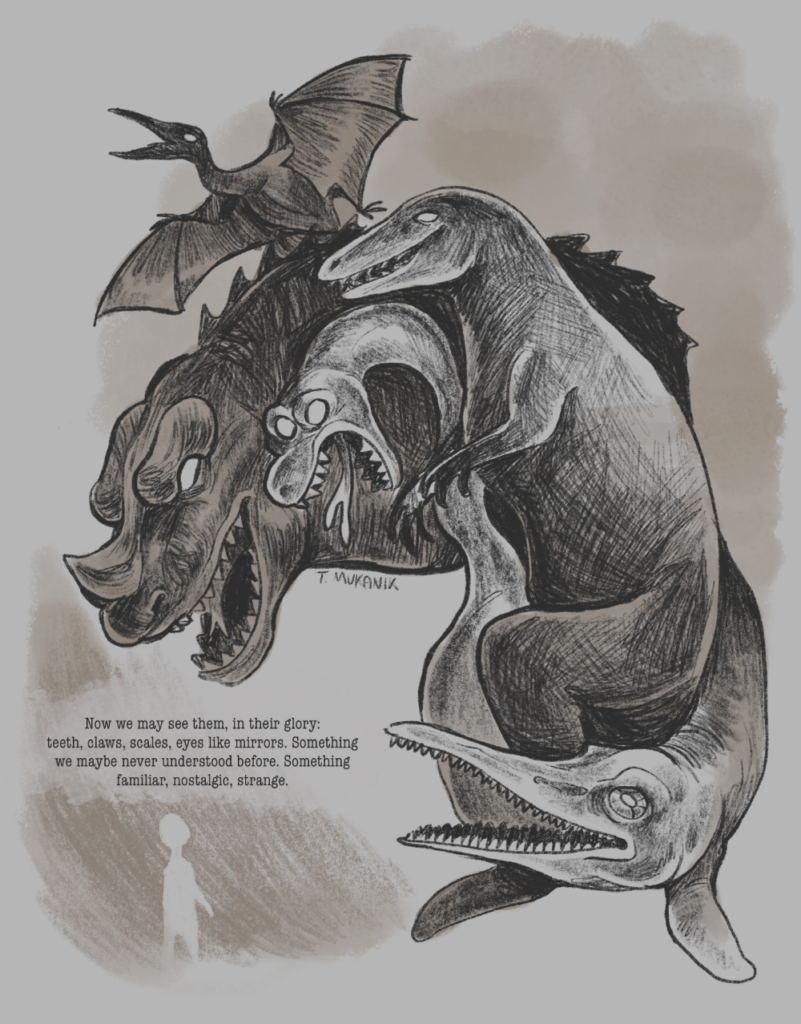 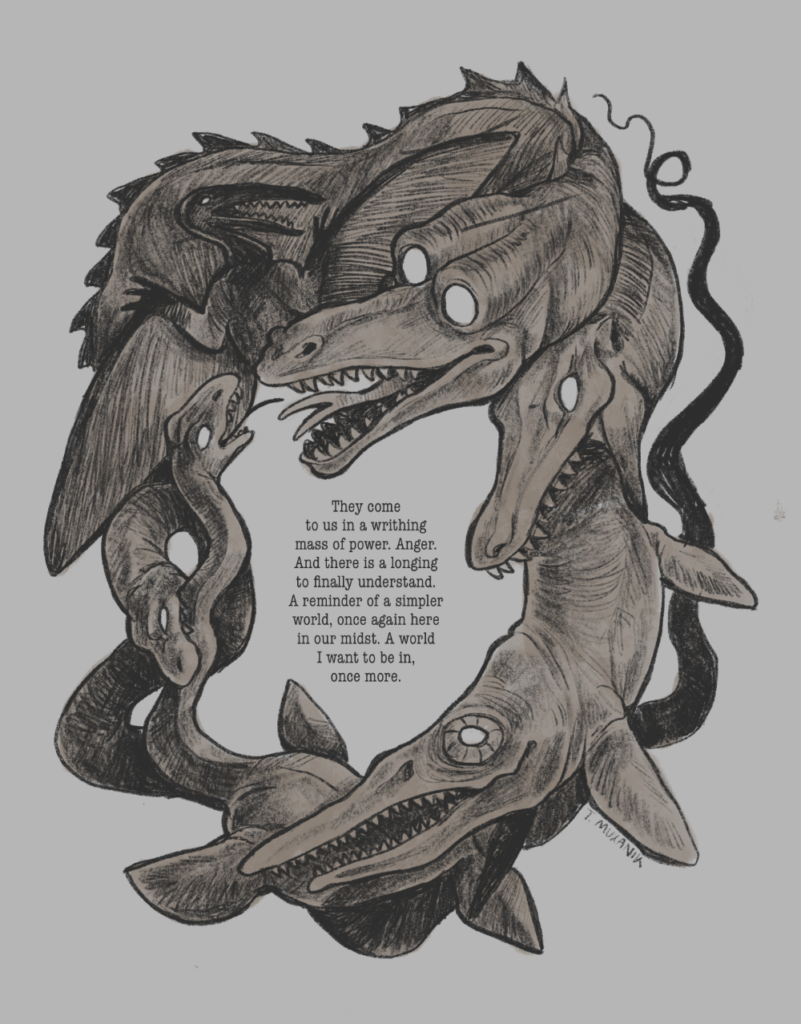 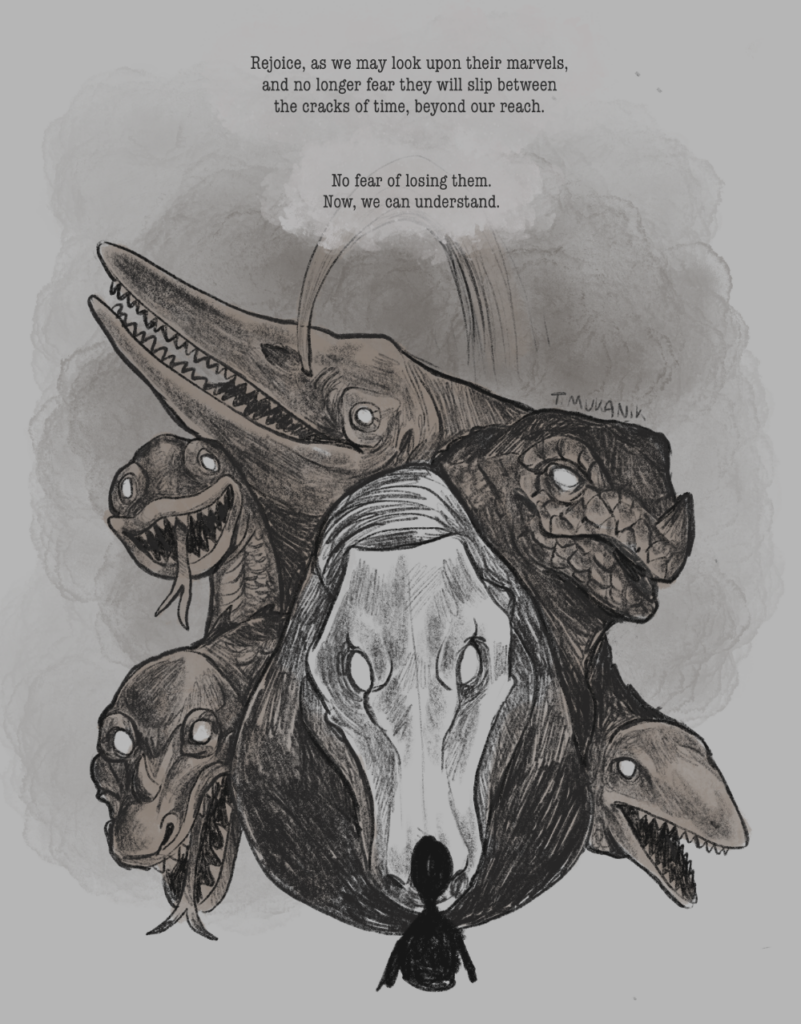 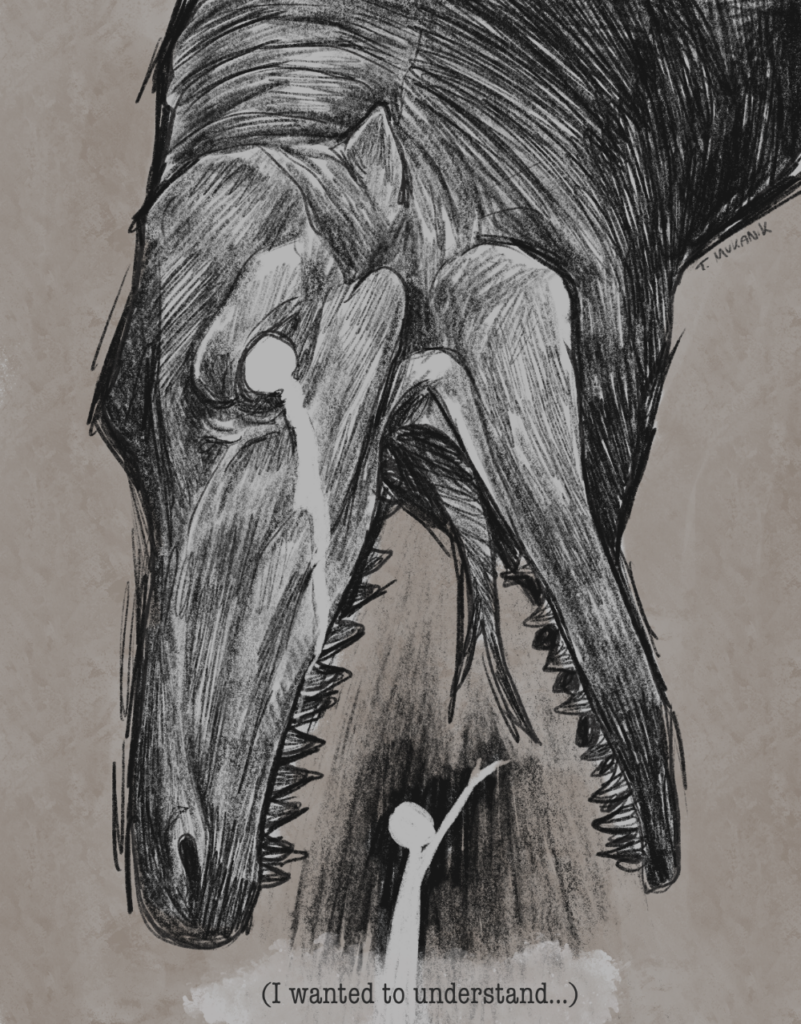 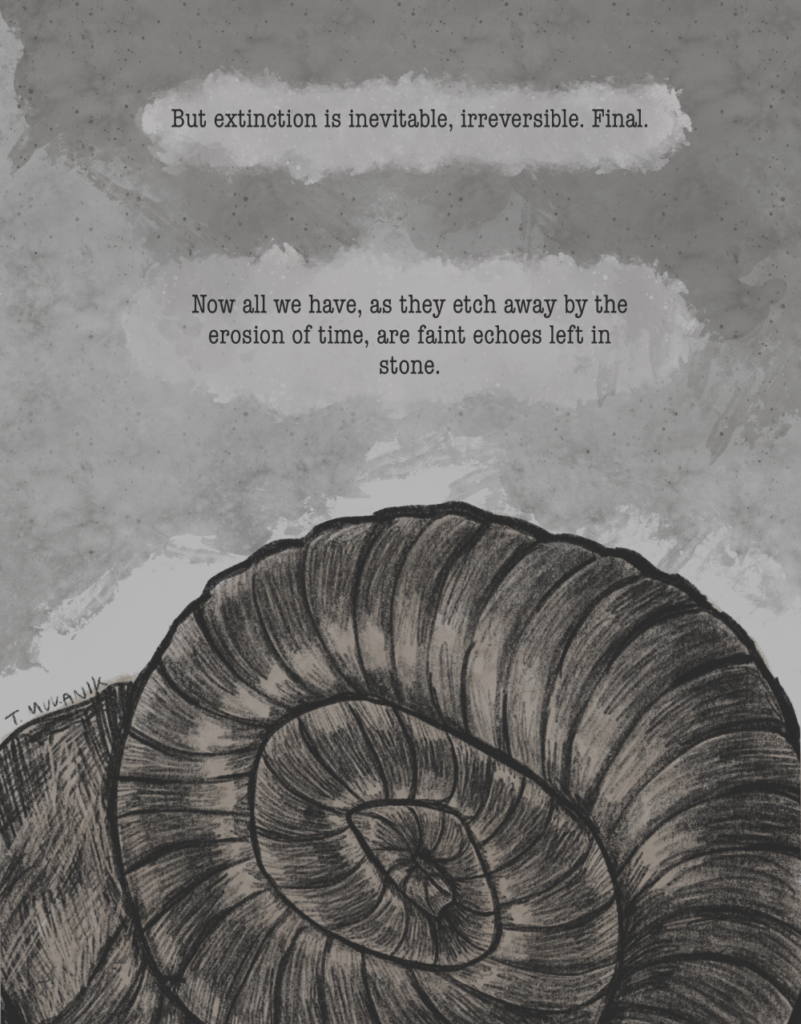 2 thoughts on “Extinction: The Zine”