Oops, well. I did say my next post wasn’t going to be about dinosaurs, but after my last fakemon post I got another resurgence of inspo, and ended up making a whole bunch more. Which means now I gotta talk about them. I also made dex entries for all the previous mons in the last post that didn’t have them, and edited them in.

Anyway, last time we had some starters and a few other early-region guys. This one is much more of a mix up! Let’s start with the most important one: the “box” legendary, or main legendary Pokemon of the storyline! 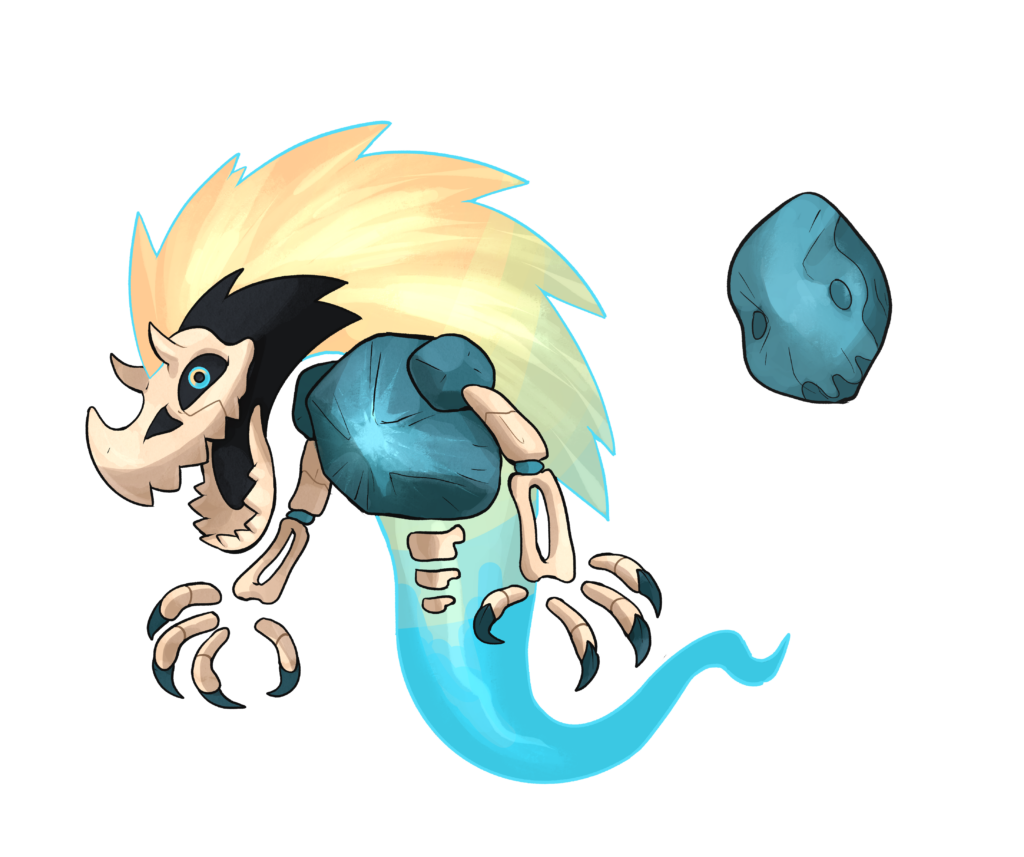 This is Irrideorite! The Extinction Pokemon. Irrideorite isn’t exactly a fossil, but the resurrection of a chunk of meteor that is said to have wiped out all life on the Lapeo region ages ago. The deadly force of the extinction event was given life through this process (and… most likely performed by whatever “evil team” is present in the Lapeo region, which I’ve yet to really flesh out). It is a Ghost/Fire type.

It’s dex entry is: The ghostly form of a meteorite from long ago that destroyed the Pokemon of Lapeo. It was brought to life through Team __’s meddling.

Irrideorite also has another forme, because legendaries always have formes. This is probably the version that the protagonist fights it in first, which I like to call the Impact Forme. 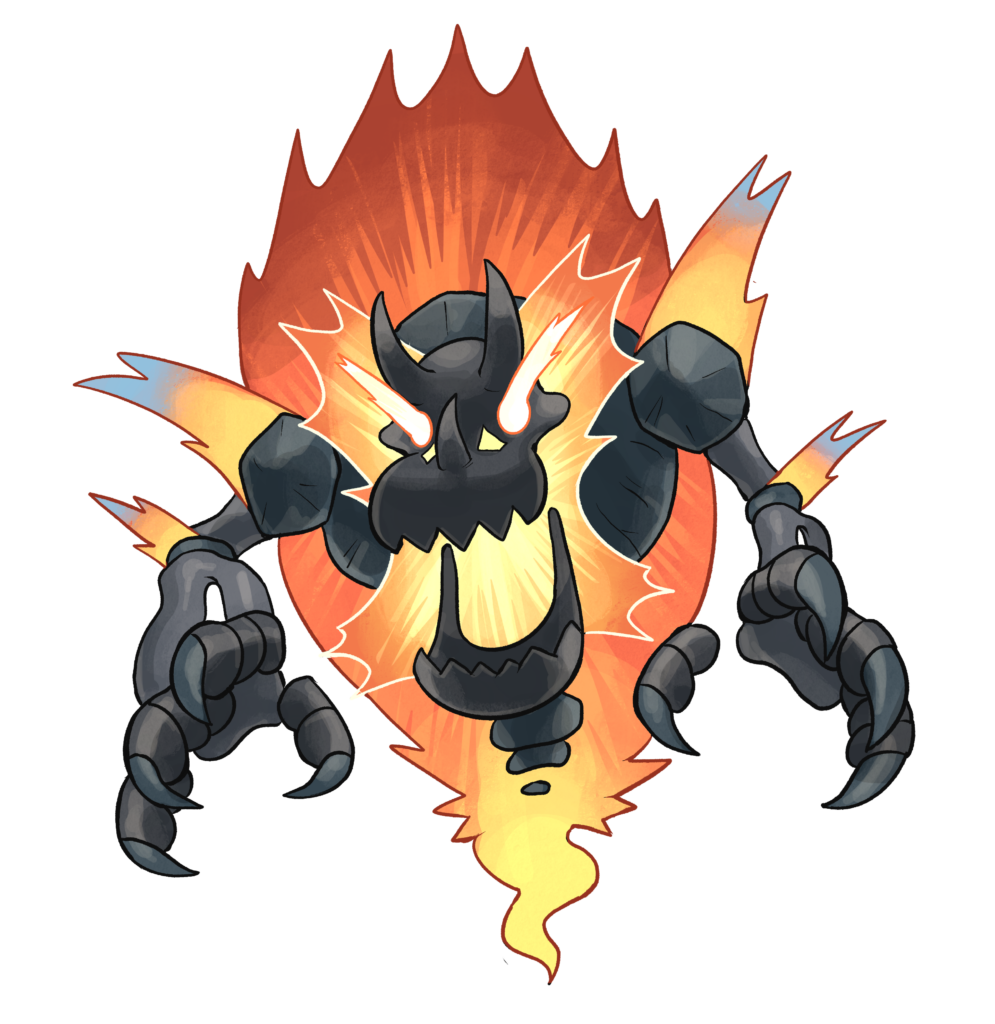 Obviously this Fakemon takes inspiration from the meteor at the end of the Cretaceous period, but also represents extinction as a whole. I thought it was fitting for a region of only fossils mons that the main legendary would be a representation of extinction itself! Which, of course, you can bag in a Pokeball and carry around with you like it’s nothing.

Next up we have some new evolutions of already existing Pokemon: 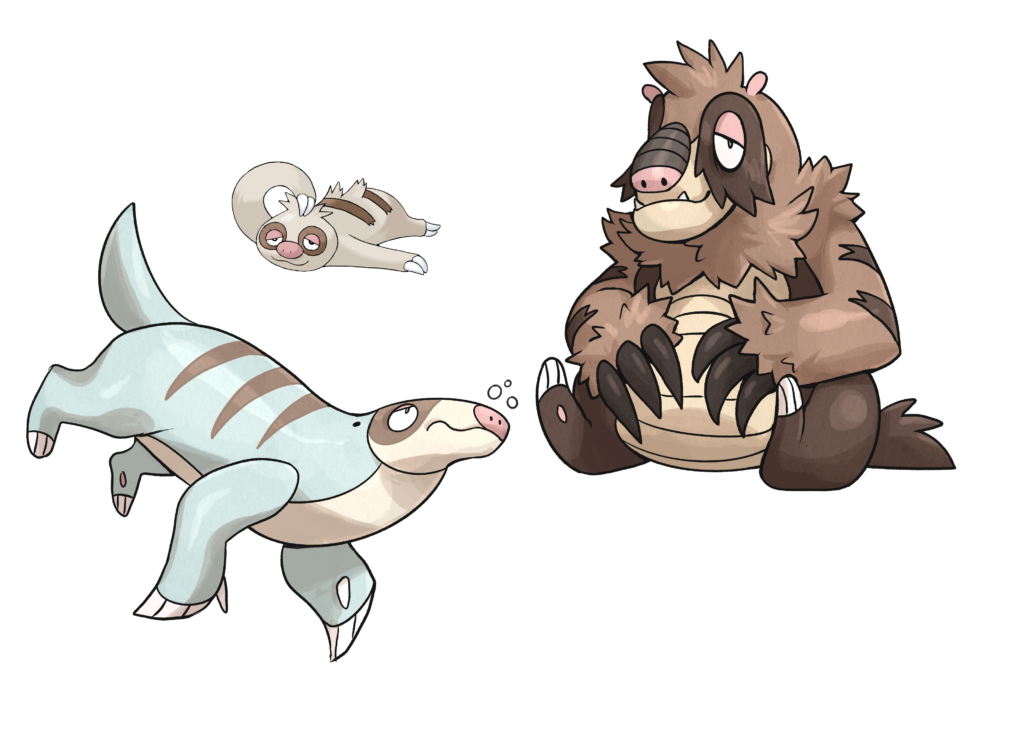 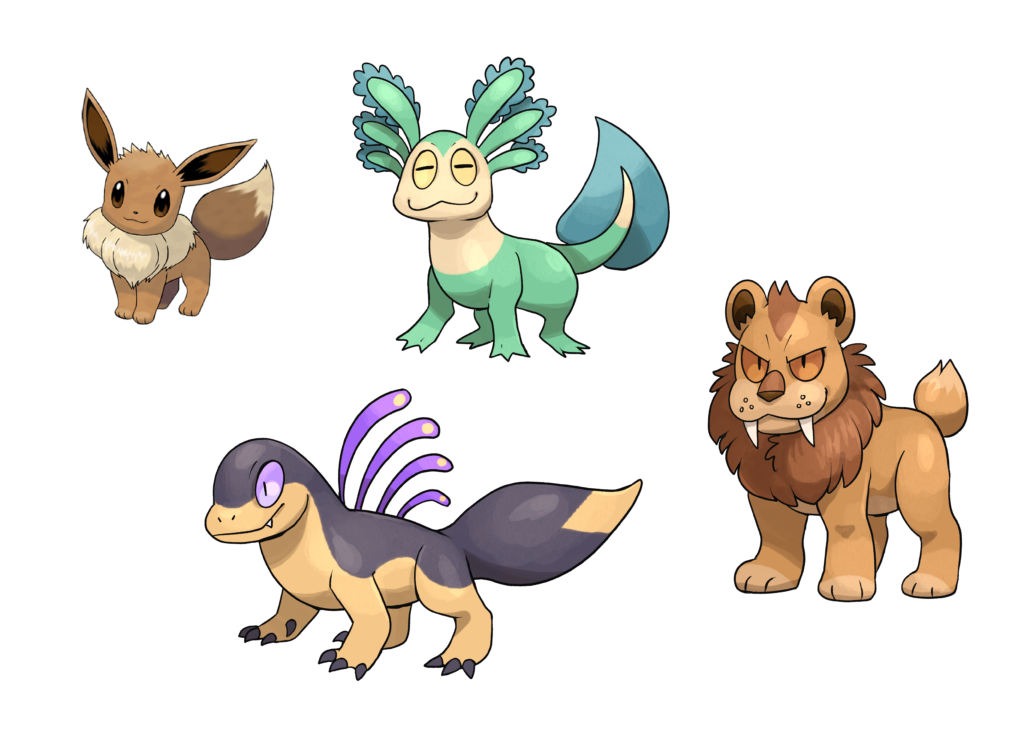 What new region is complete without new Eevee-lutions? But uhh… these ones are definitely much more unconventional.

This is Paleon (top), Meseon (left) and Ceneon. They each represent the three big periods of life on earth, the Paleozoic, the Mesozoic and the Cenozoic, mostly focusing on vertebrate life. In some way, you could say this is technically de-volving Eevee (you could argue that for all the new evolutions in this region). Although this line doesn’t quite represent a mammalian lineage, since I already covered that with the Fire starter, and wanted to have some more fun with this one. Instead they sort of represent the “dominant” (very heavy quotes here) vertebrate families during these periods: amphibians, reptiles, and mammals, respectively.

I’m not sure what method would be used to evolve these guys, other than putting your Eevee through some de-volve machine and choosing how far back you wanna send it. 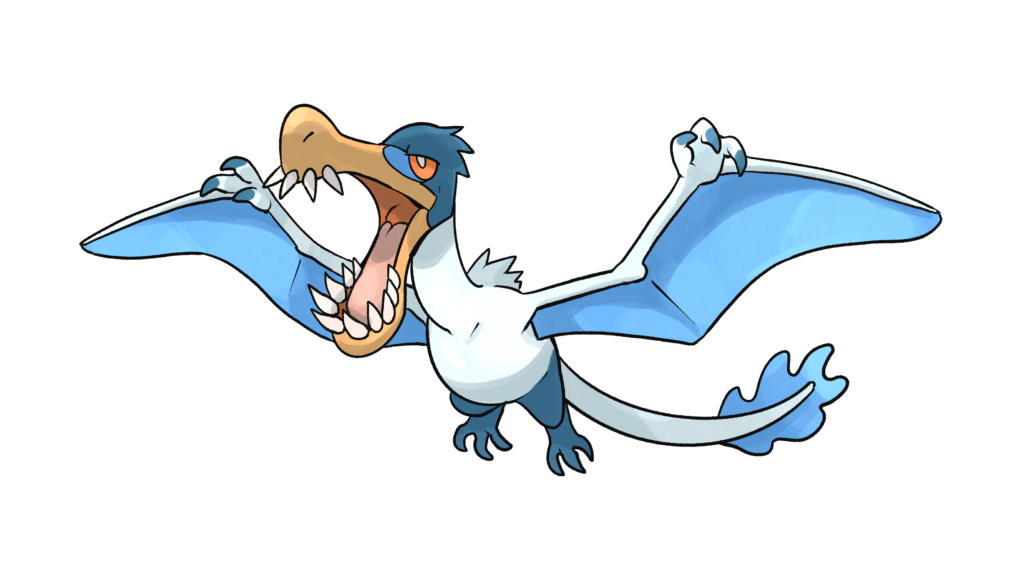 Next we have Lapeoan Aerodactyl! As mentioned previously, restoring fossils in the Lapeo region means fossil Pokemon aren’t all part Rock type. In this case, the Rock was removed entirely, leaving Aerodactyl as a strictly Flying type.

Aerodactyl is tricky because it’s sort of a mix-n-match of a bunch of different pterosaurs (which I think is really cool). I did a bit of the same here, basing it mostly on Ornithocheirids, which are large pterosaurs with big toothy beaks. I couldn’t get rid of the tail, though, so it also has a bit of Rhamphorhynchus in there. I was unsure if I wanted it to be just Flying or perhaps part Water type… I’ve already made quite a few Water types, though (though I’ve also made many Flying types, but I definitely have a bias there…)

Its dex entry is: (Jaw Pokemon) The technology of the Lapeo region reveals a more docile Aerodactyl. They use their strong jaws to snap up prey. 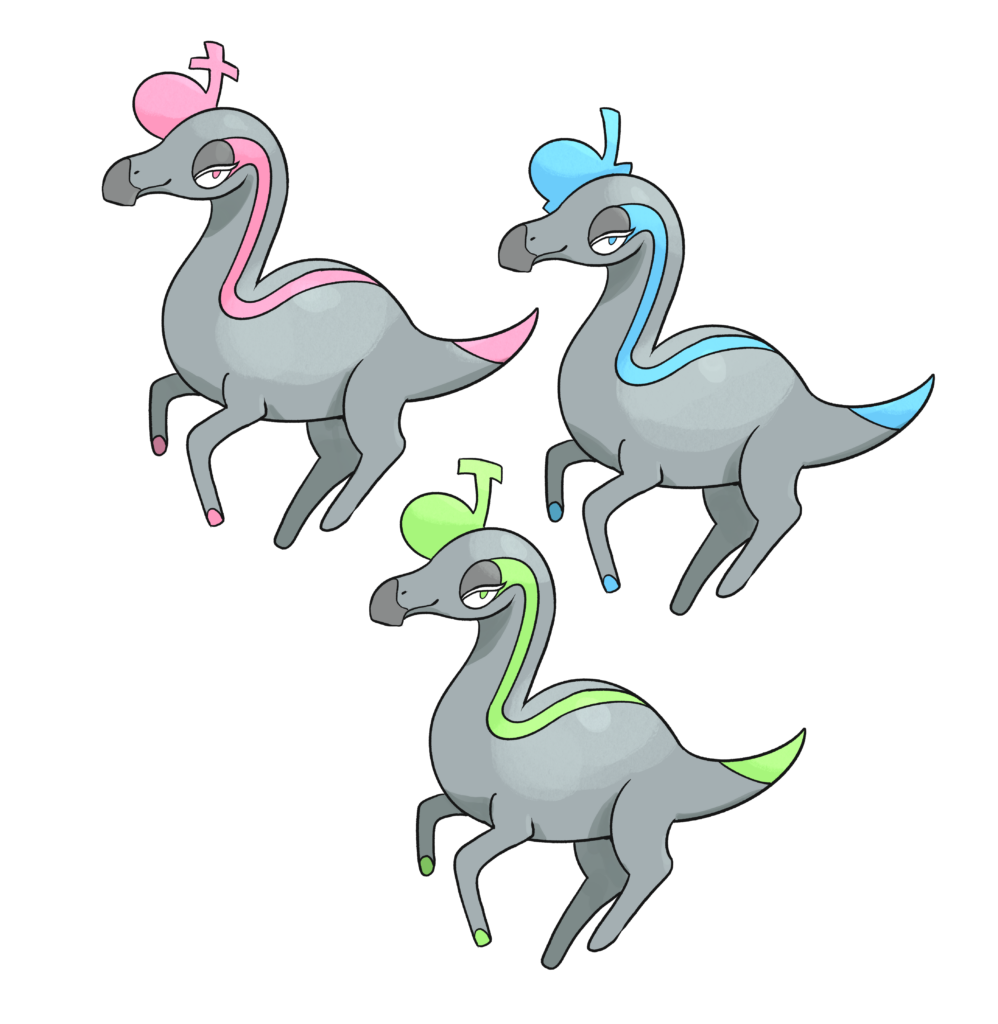 Next we have a couple of original, single-stage Pokemon! This is Saurophonic! Its based on Parasaurolophus, which is possible to hear what it may have sounded like! I wanted to play with the idea of a music-themed dinosaur mon like this. It has three different forms: Alto, Tenor and Bass form, which don’t change much other than the colour and probably the pitch of its cry. I mean, you gotta have your gimmicky collectible mon.

Its dex entry: (Song Pokemon) Saurophonic have different appearances depending on the pitch of their song. Together they can create beautiful harmonies. 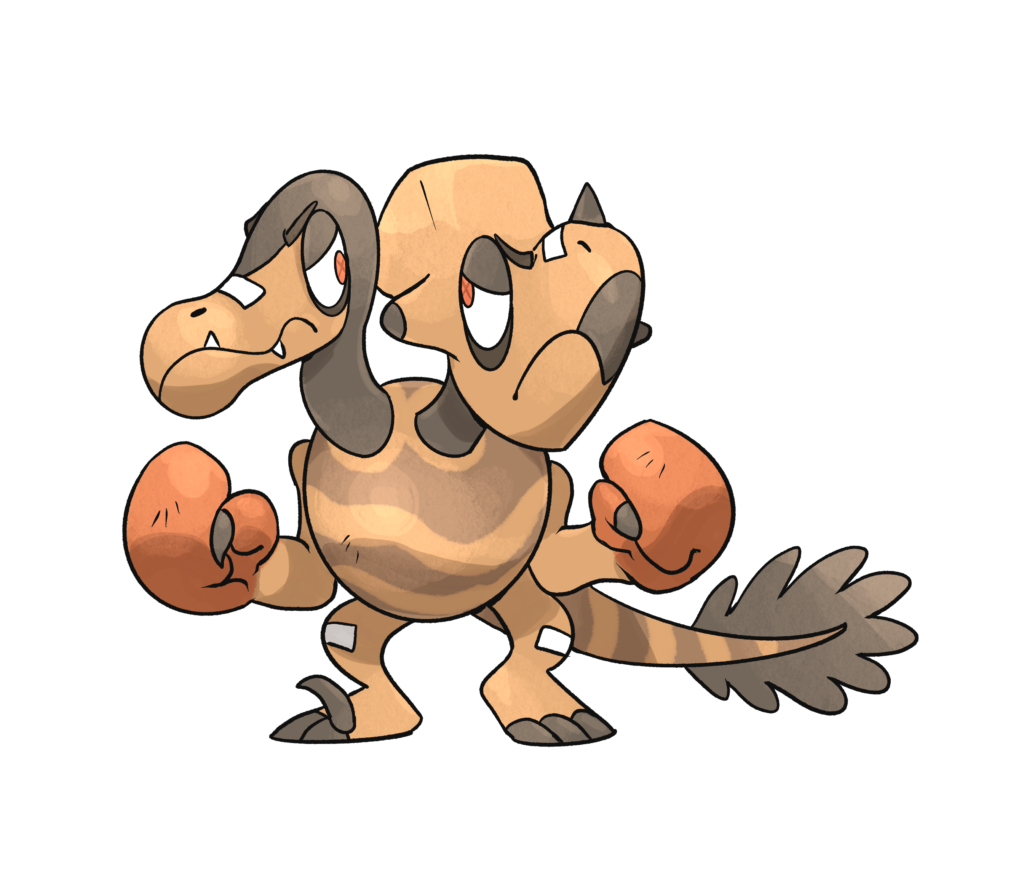 Lastly we have Velocerate! A double-headed Fighting type. This one was a lot of fun–it’s based on Velociraptor and Protoceratops, but more than that it’s mostly based on the famous fossil of them: the Fighting Dinosaurs. This fossil preserved the two dinosaurs in an enteral battle with each other. I thought it would be a cute idea to combine them into one Pokemon, who is also locked in a battle with itself. Also how could I not make a Fighting type Pokemon based on a fossil called the Fighting Dinosaurs.

Its dex entry reads: (Dual Fighting Pokemon) A long standing feud between two Pokemon eventually led the two to combine forever in Velocerate. The two heads still do not get along.

That’s all for this one! Mostly a lot of single-stage guys this time, that I just had to get these out of my system after the last post, I guess. If I continue with this little project I hope to design the human characters for it as well, but we’ll see how long I stick with it. For now, I hope you enjoy these little snippits as I play around with these ideas.