Okay, well Pokemon has always been a part of me, and even as a kid I was scribbling fake Pokemon (“Fakemon”) till my heart’s content. This is something even now I return to every once and a while, because it’s just a fun little exercise–coming up with designs, studying the “style” of Pokemon to mimic it, and producing ideas that fit a Fakemon nicely.

Recently I came up with the idea of an entire new region and decided to play around with designing some Fakemon for it! Unfortunately I didn’t get as far as I wanted, and have been too busy to properly return to it, but one day I’d love to design more ‘mons, on top of the trainers and other humans. I managed to do the starters and a few others, so for now I’ll share those.

This region is called the Lapeo region, and there’s a specific quirk to it: it has no actual living Pokemon on it! Instead, ALL the Pokemon come from fossils. Because this is the main way people collect Pokemon, their systems are more powerful in resurrecting fossil Pokemon than any other region. Therefore, fossil Pokemon aren’t all part Rock-type. This includes fossil Pokemon from other regions, who all have a Lapeo form, as well as original Pokemon. Basically, this is an excuse for me to design Fakemon AND geek out with paleo knowledge. So. Yep, it’s probably pretty nerdy. Let’s dive into the starters:

I had each starter line represent a major tree of life, with Sliktaalik representing reptiles, Embrodon mammals, and Trilobud arthropods. Sliktaalik, as the name implies, is based on Tiktaalik, one of the very first vertebrates to walk on land; Embrodon is based around Dimetrodon, a synapsid (synapsids would eventually yield mammals); and Trilobud is based on trilobites, a once common seafloor arthropod.

I even wrote their dex entries, which are:

As you raise your starter and they evolve, they become… 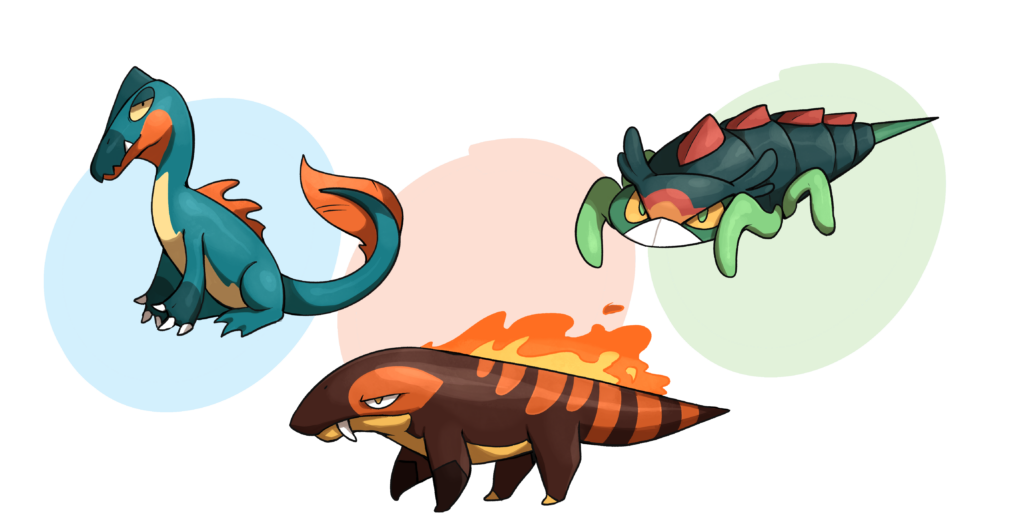 Here we begin diving into different creatures but still (relatively) in the same theme. (Tiktaalik is technically not really a reptile, but I just felt it proper to use such an iconic early species as a starter).

Nothocean is based on nothosaurs, marine reptiles from the Triassic. Pyrapsid is based on gorgonopsids, a range of predatory synapsids from the Permian. Euripterra is based on sea scorpions, arthropods that dominated the seas from the Ordovician.

These stages are still the same typing as their predecessors, but that’s about to change… 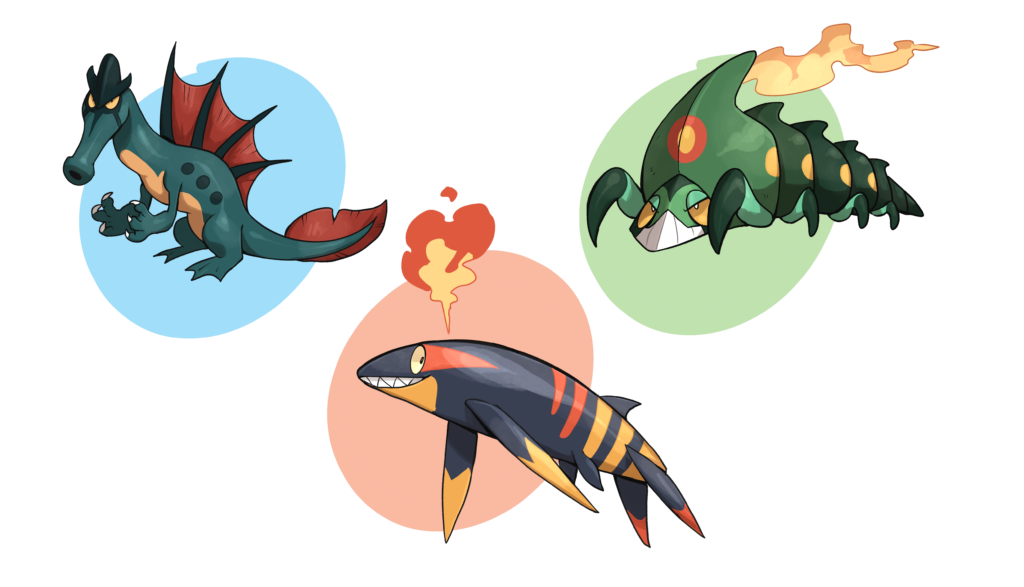 Okay, I have a lot to say about these guys. Spirate is based on the dinosaur Spinosaurus, but is also modelled on a pirate ship. Basepplin is based on whales, in particular the ancient whale Basilosaurus, as well as a zeppelin/blimp. Arthromotive is based on the giant millipede Arthropleura, as well as a steam engine. I wanted each of them to not only represent their family trees, but take on a form of modern human transportation—from the sea, sky and land. This showcases how much these particular Pokemon have adapted to human society, making them perfect for starter Pokemon. (I like to think that although their first stages are their ancient forms brought back to life, their final stages didn’t evolve until they were around people.)

Here are their dex entries:

There are the starters! I uh, put a lot of thought into them, hence why I wanted to make a post—I’ve never been able to geek out about them as much anywhere else. The question now is: which starter would YOU choose?

I also have some sketches that I used to feel out their designs: 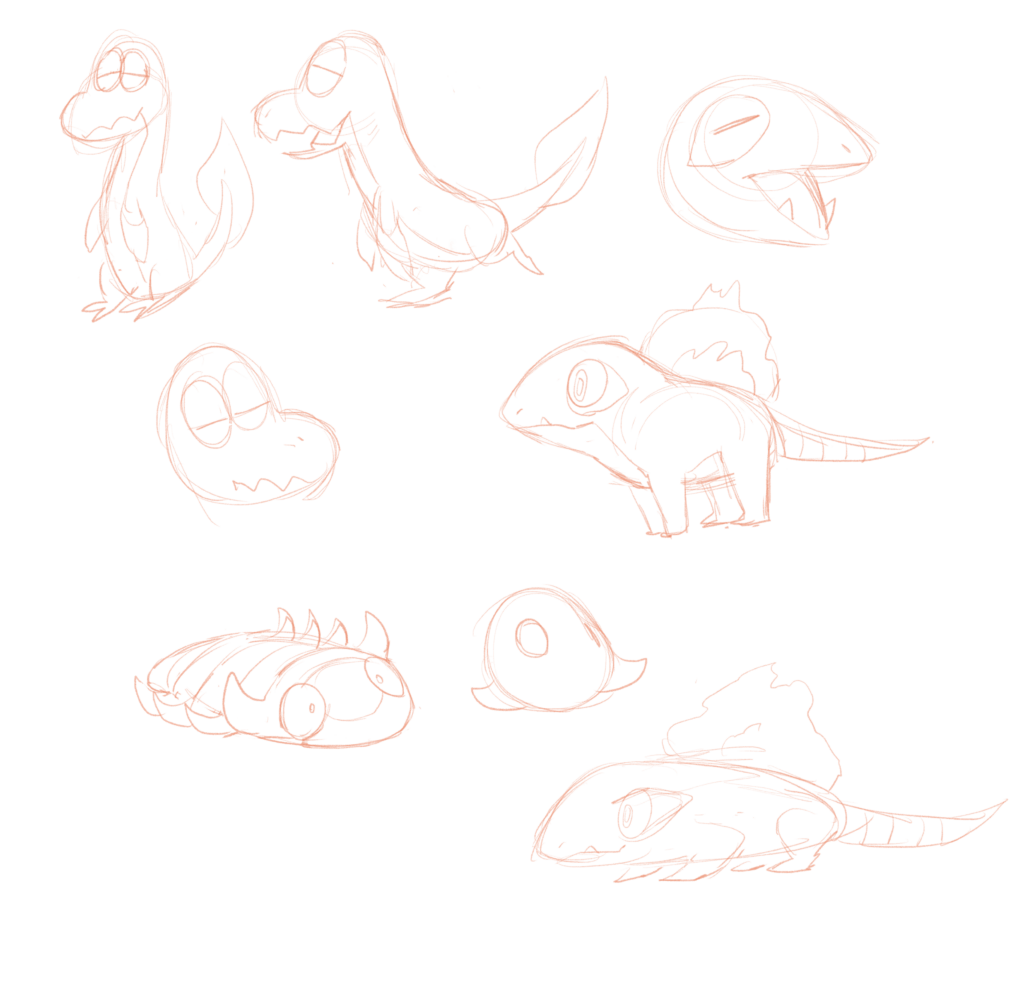 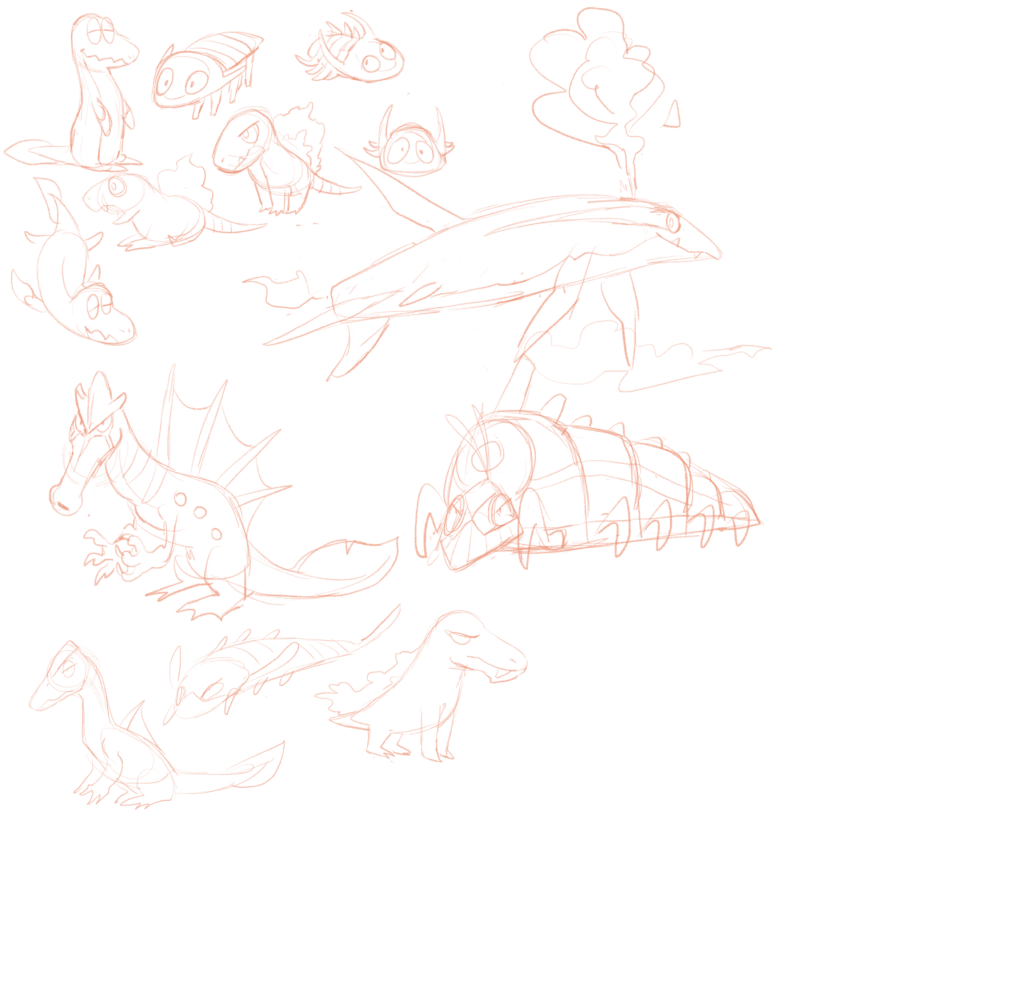 I have a few more Fakemon that I also designed for this region—I don’t know if they are as in depth as these starters, but I had fun making them, too. 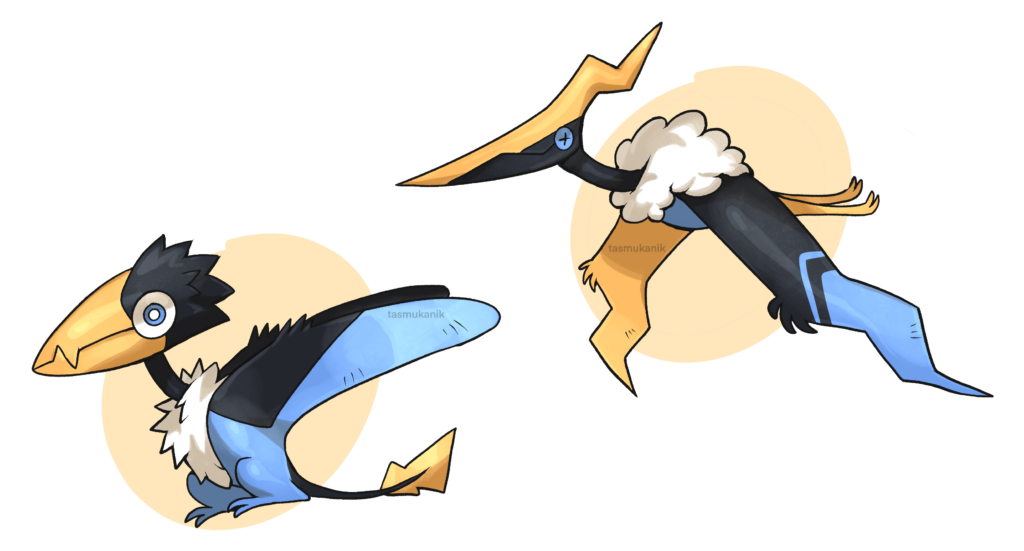 The “early bird” Pokemon of this region isn’t really a bird at all. This is Zapling and Pteranimbus! They are based on pterosaurs, and are both Flying/Electric. 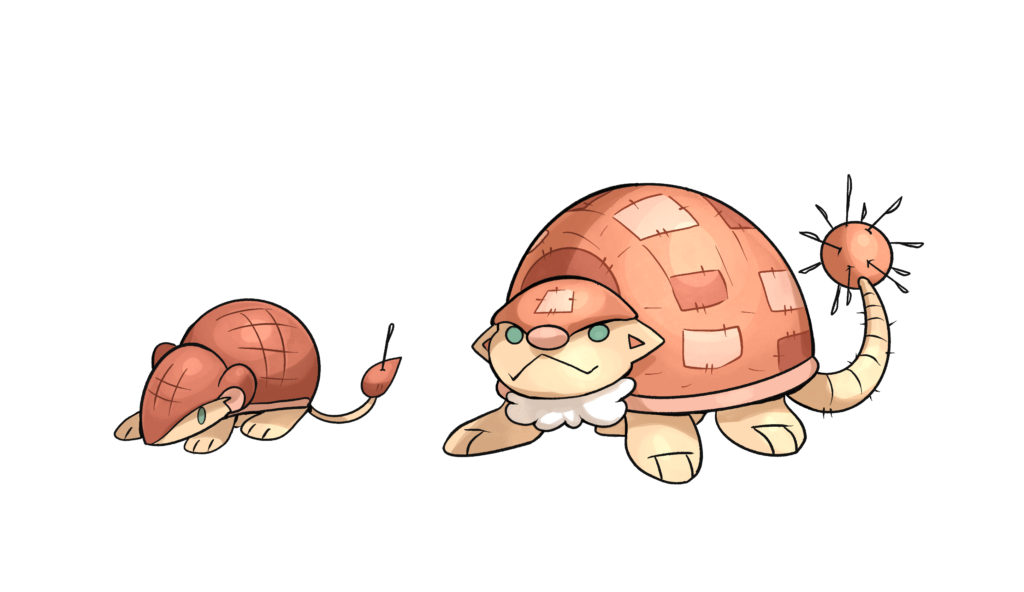 The “early rodent” of the Lapeo region would be these guys: Sewadillo and Glyptoquilt! They’re based around Glyptodonts, giant armadillos. I’m unsure if these guys would be just Normal typing, or perhaps Normal/Fairy. I also wasn’t the happiest with this final design, I may go back and redo it if I return to this project.

As mentioned above, the Lapeo region has some regional variants of regular Pokemon, too, whether they be fossil Pokemon that are not just part Rock type, or some ancient versions of regular Pokemon. Unfortunately, I didn’t get around to too many of these, but the ones I did manage get both of these ideas across! 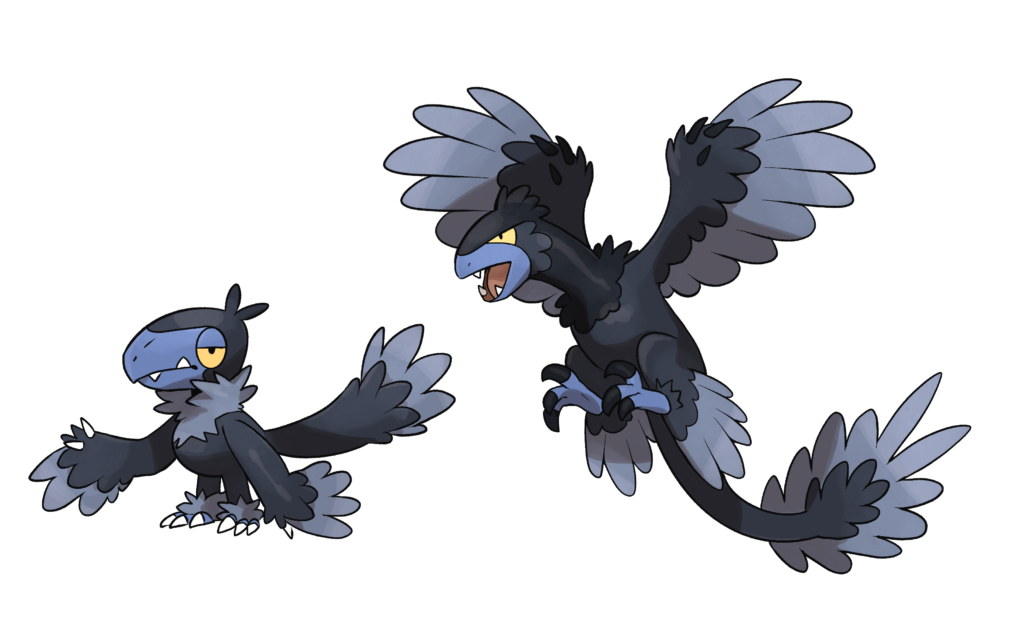 The Lapeoan Archen and Archeops look a little different than normal. Instead of Rock/Flying, they are now Dark/Flying, and are modelled after the feathered dinosaur Microraptor, whose colours we know were black and iridescent, like a crow! These guys aren’t too different than their normal forms, I feathered them up a bit more and obviously changed their colours.

Lapeoan Rhyhorn and Rhydon also have a makeover, plus a new evolution: Rhytherium! These guys are clearly modelled after wooly rhinos, with Rhytherium specifically being inspired by Elasmotherium. They are all three Normal/Ice types. The challenge I quickly found with this one was how actually unlike a rhino these Pokemon are, so it was a bit harder channelling that wooly rhino look.

It was a fun challenge with these ones imitating the official art and poses, I learned a lot when I did these two!

Unfortunately, that’s all I have right now! I would definitely love to revisit this little project, but of course, it’s very, very much a side-thing. I still have some ideas kicking around that I’d love to draw, and perhaps even revisit some of these designs to fine-tune them. I’ll be sure to make more posts when I do!

Thanks for reading! I promise my next post will not be related to dinosaurs in some way… hopefully….