I guess it’s not too surprising to hear I like dinosaurs. It says it right there on the side, and in plenty of my works and illustrations you can find them. Not just dinosaurs, too, but all manner of extinct creatures.  I don’t think you really need an explanation on why you like dinosaurs, because they are just extremely cool, but I thought my first little blog entry on this site would delve into it anyway, and my history and feelings on all the creatures that are only written in stone.

There is just something so alluring about extinct animals. Even those who have recently gone extinct still garner huge swaths of interest, even when we have photos and drawings of their appearances. So I wouldn’t say the thing that draws us, and me, to extinct creatures is the mystery of their appearance (though, the further we go that might still be an element). For me, though, it’s just the amazement over the fact these were real, living animals that slept, breathed, hunted, ate, played–as well as a small amount of grief that we will never be able to witness them doing this. All we have are what’s left in the rocks and bones.

The fact that we have these fossils at all is almost a miracle, and only the result of just how vast time on earth is. The circumstances that need to line up for fossilization is so particular, and even when it occurs, the fossils then can’t be lost to erosion or any other force. It’s honestly amazing we have such a wide sampling. Though I can’t help but always think of the creatures who never even got to be fossilized, and therefore will never exist to us–like ancient ghosts. There’s probably more of these than the species we have found, and that idea definitely haunts me (pun half-intended). 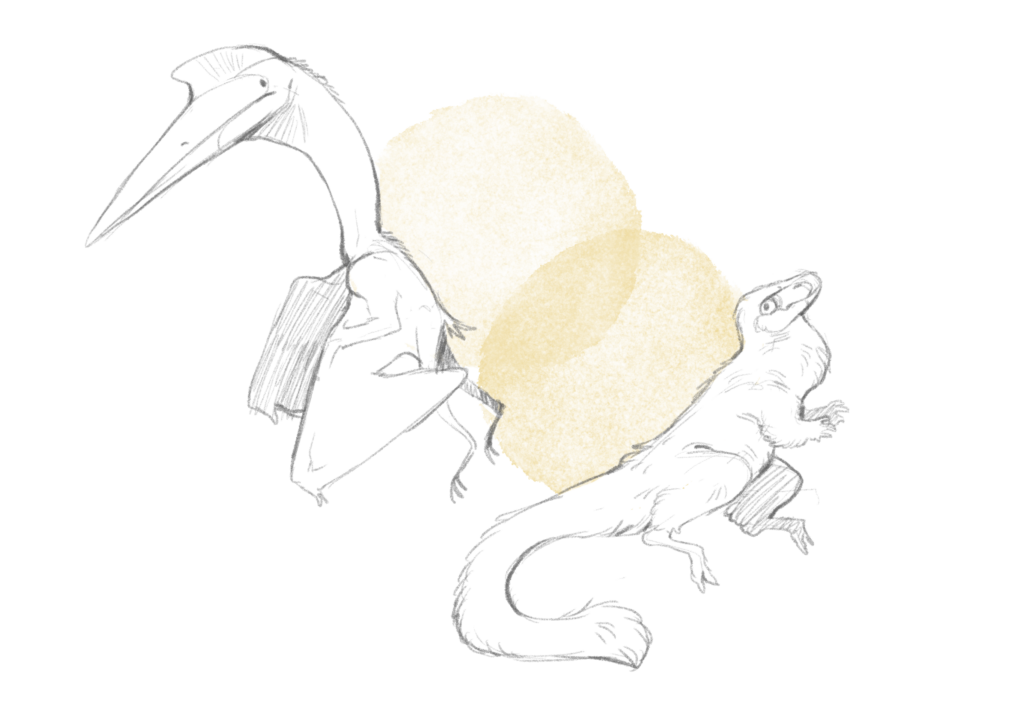 My interest in dinosaurs started when I was a kid–as did for most people, I’m sure. Kids and dinosaurs just go together. I also grew up in Alberta, which doesn’t have much to say for it other than oil and dinosaur bones. It was an annual trip for me and my family to go to the Royal Tyrrell Museum in Drumheller, which definitely fostered my interest. After that, I became obsessed with documentary programs like Walking with Dinosaurs, as well as plenty of good dinosaur books. I was able to write Quetzalcoatlus in grade one but struggle with other, much simpler words, and I would confound my kindergarten teacher when she asked what my favourite dinosaur was (I said Leaellynasaura, and she looked at me funny and said please pick Brontosaurus instead).

My interests soon shifted, though. I was just a kid like that, always moving on to the next Really Cool Animal (it was dragons next). Dinosaurs remained an interest, but sort of in the background, especially as the CGI dino-documentary craze gradually phased out by the end of the 2000s, and maybe also because dinosaurs are generally regulated as a “boys” thing (do not get me started). The thing that reignited my passion? Jurassic World.

The paleo community has… plenty of mixed feelings on the Jurassic Park franchise. On one hand, it spurred a huge spike of interest in dinosaurs in the 90s/early 2000s and updated the idea of them to the public conscience from sluggish lizards to active creatures, a much more accurate concept. On the other hand, it also type-casted dinosaurs as killing machines who’s only purpose was to look cool and scary, causing a refusal to accept more accurate depictions of dinosaurs as we learned more about them, because it’s “ruining them”. It’s complicated. Personally, I understand–I do like the movies, though, they’re a lot of fun. I even enjoyed Jurassic World a lot, even though that one is probably the most egregious here. I am not immune to giant monsters fighting each other. And I have to give it credit–it did suck me back into dinosaurs, because as inaccurate as they were in JW, I started to wonder “Hey, it’s been a few years since I checked up on dinosaurs, what have I missed?”

I had missed so much.

Feathers discovered on so many more dinosaurs, proving many of them did have them. New skin impressions. An updated idea of pterosaurs–no longer “lesser birds”, but ingenious fliers who were unlike anything living today. And a new movement of paleoart, depicting dinosaurs just as they might have been–feathered, performing behaviours typical of any animal, some wide and fun speculation. It opened up a whole new world for me, and I soon joined in–gobbling up blogs, journals, anything that came my way that gave me new information.

There is some feeling I have, when I find myself drawing them, reading about them–and of course others who do it too–in bringing back a million-year-old creature back to life. This creature never knew us, and never even imagined our existence. It knew only its own life, its own world, which we will never fully understand. And then it died, and perhaps that death would have been final, in its eyes. It had done what it was meant to do. But by some force, some incredible circumstance, its body was preserved, locked away in stone, and we find them, study them, draw them, bring them back to life.

So then, I ask… did it really die?

I just think there’s something really endearing, for as cruel as we pose our world, that even the earth cannot let go of some of its creations. And so it captures it, holds it in its clutches, until some day something that may understand what it sees will look upon it, and also revel in its creation.

4 thoughts on “A Loveletter to the Prehistoric”